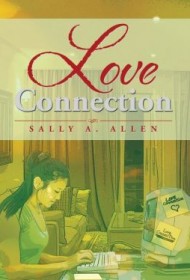 When teenagers Glenna Warner and Cheryl Hill sign up for the Love Connection website, they set off a chain of unfortunate events, including several murders, in this novel titled Love Connection.

The plot, built around the families of both 17-year-olds, heats up after Cheryl is raped by Jacob Black, a man she met online. The rape furthers the discord between Cheryl’s parents, who divorce. Cheryl’s mother, Carrie, seeks refuge in alcohol and hits rock bottom.

Glenna’s family, meanwhile, is coping with the death of her father, and her mother Mae struggles with Glenna’s seven-year-old sister, Jamie, who is prone to violent outbursts. Still, there is love and romance and a new job in Mae’s future to help her through the rough spots.

Although readable, this book is a hodge-podge of ideas and actions. The plot is replete with unresolved questions, inconsistencies and illogical events. For example, Jacob thinks about letting his girlfriend drown during a midnight swim, “but he had other plans for her…” A few minutes later, he throws her off a boat. Even the author seems confused at times, mixing up Cheryl and Carrie’s names at a critical juncture in the plot.

Allen can’t seem to decide if her book is a murder mystery, a romance, or a farce. Her idea of police procedure, for instance, is straight out of a comic book, with the policemen, Rollie and Butch, pursuing Jacob Black as if they were cartoon buffoons. While this might work in some stories, here Allen’s intentions aren’t clear, and the farcical tone seems to come out of left field.

The idea behind the book that one event can have a ripple effect on others is worth exploring. If the author could better develop her plot and characters, with an eye toward making both more believable, she might be able to mine the idea for gold. As it stands, the book will baffle most readers.