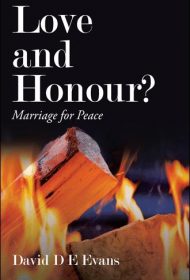 Centuries before Shakespeare wrote Romeo and Juliet, Indian and Pakistani legends were filled with cautionary tales of star-crossed lovers whose forbidden romances led to their deaths. Sadly, such stories aren’t only ancient relics. In Love and Honour?: Marriage for Peace, Australian author David D.E. Evans demonstrates, with chilling precision, how the ostracism and murder of couples daring to pick partners outside their caste, religion or families’ wishes continue today.

Quoting the Associated Press, Evans writes that in Pakistan more than 1,000 women were “murdered by family members in 2015 for meeting with, sitting with or marrying a man not chosen by her family.” In his well-researched chronicling, Evans gives crisp, albeit scant, outlines of a handful of cases, mostly in India.

Included is the 2007 (not 2010, as Evans writes) kidnap and murder of newlyweds Manoj Banwala and Babli, whose elopement infuriated the bride’s family because as members of the same community, they were considered siblings even though they were not directly related. Five of the bride’s family members were sentenced to death for forcing her to swallow poison and strangling him. The sentences were commuted to life in prison.

Each story is broken into bite-size synopses, making them accessible while still retaining their shock value. However, Evans seems to strain to find societal progress and remedy for such deeds (he details small advances at the end of each chapter in what he calls “The stepping stone”). Sadly, for some couples their best hope is banishment.

Evans relies heavily on published news reports. His footnotes make the book feel like a lengthy research paper, generating an air of detachment from dramatic and compelling material. He hints at his own outrage, but the book would benefit from a more pronounced point of view.

Evans laudably brings awareness to an important topic, but his work could have been elevated and his audience expanded had he fleshed out the stories into fuller narratives.

Also available in audiobook and ebook.