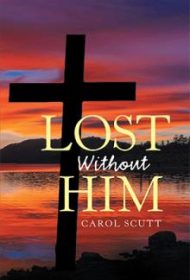 Carol Scutt shares her life story in this powerful testimony of passionate love that deepened over time, dedicated to the memory of her beloved husband, Paul.

Just before the dawn of the 1970s, 16-year-old Scutt met Paul while working at the local Kroger grocery store. The handsome stock boy stole her heart, and thus began a 50-year love affair that not even death could dampen. Through stormy waters of financial hardship, Paul’s 15-months in Vietnam, raising children, innumerable job relocations, mental and physical ailments, and just plain life, the couple’s anchor of love and Christian faith kept their marriage from drifting apart.

Scutt’s natural storytelling abilities shine as she effortlessly draws readers into her world and reveals raw emotion in difficult times: from the adrenaline of escaping a beating by her alcoholic father to the suspense over Paul’s possible departure to Vietnam to her frantically trying to resuscitate her husband in their home on the day he died, Scutt’s concise, vivid descriptions deliver the full impact of each situation. In retelling a horrific night with her drunk father, for example, she brilliantly sums up her childhood feelings in one sentence: “Dad was flat on his back…I straddled his chest and raised the hammer, intending to bash his head, hoping his alcohol-soaked, 150 IQ brain would spill out.”

Only one misstep emerges when news of her husband’s death is presented in a chapter written by her pastor. The unannounced shift in speaker is jarring, and the content skips ahead of the chronology.

Ultimately, Lost Without Him reaches beyond Scutt’s circle of influence—a true accomplishment for a memoir. Scutt honors her husband’s memory through recounting his admirable strengths alongside his human frailties.

This realistic picture of an imperfect but well-lived life is refreshing amid the plethora of scandalous personalities of current times. For anyone grieving the loss of a spouse or in need of a good love story, Lost Without Him is a worthwhile read.