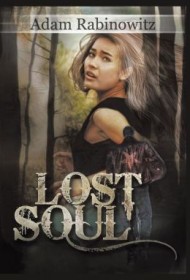 In Adam Rabinowitz’s well-wrought Lost Soul, every thousand years a Pure Soul is born, an angelic entity that can offer immortality to those evil enough to acquire it the only way possible: murdering the host by sucking out her soul. Three evil wizards raise the stakes, since only one can succeed.

In Italy in 1012, a young woman named Asaranth is discovered as a Pure Soul and is hounded by evil forces seeking immortality. She transfers her soul to a crystal, hides it and throws herself off a cliff to her death. Temporarily defeated, the wizards transfer their souls to crystals protected by their descendants, who will awaken them when the next Pure Soul is born.

Fast-forward to the present, when Cassandra, a college student, is on holiday with friends in Italy. They tease her for being too honest and naïve, but when the wizards identify Cassandra as the next Pure Soul and the trip takes a dangerous turn, everyone, especially Cassandra, discovers unimaginable strengths.

Rabinowitz understands what motivates people, for good and for ill. His characters are well developed, from the wizards, to Cassandra and her friends, to the gruff, charming Captain Detective Baldi and the allies who help Cassandra. As Cassandra learns about her true nature, she initially resists but finally embraces it to confront these ruthless men. The Italian setting adds an armchair-travel element, taking readers from Verona to the Italian Alps.

Two minor flaws hinder the story. First, the plot occasionally slows when Cassandra and her friends are in danger but linger to eat, sleep or discuss something mundane although there’s no time to lose. Second, when Cassandra fully engages the powers of a Pure Soul, it’s not clear how it happens or how it will carry over into the future.

Still, Rabinowitz has created an original, intriguing fantasy world with captivating characters and a satisfying ending that, even if it’s not entirely clear, leaves a welcome opening for sequels.