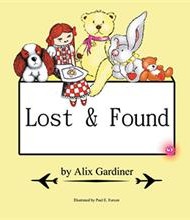 Alix Gardiner presents a heartfelt tale about toys abandoned at an airport in her children’s book Lost & Found.

Gardiner strikes a melancholy mood as readers meet Ted-e, a teddy bear who has been accidentally left behind at an airport by his owner Charlie. Other left-behind toys soon find themselves in the Lost and Found, including a rabbit toy named Flopsie, a rag doll named Emma-Jane, a dog named Bertie, and finally, a smaller teddy bear named Alfred. The toys commiserate, waffling between hope and despair, until one by one, their owners begin to retrieve them. Flopsie, Bertie, and Emma-Jane all return to their former homes. Meanwhile, Ted-e and Alfred go up for auction, ending up with a little boy who, by coincidence, has the same name as Ted-e’s original owner.

While Lost & Found is mostly text, Gardiner does a nice job integrating color illustrations into the chapters. Aided by Paul E. Forcen’s bright and emotionally engaging drawings, the book possesses a strong sense of place and character, and although there is some repetition as the toys recount their stories, it doesn’t derail the narrative.

What does present a problem, however, is the multitude of punctuation, spelling, and grammatical errors. There’s little consistency in how Gardiner chooses to set off quotations, for example, with some sentences having only a beginning quotation mark, others only an end mark. This can be extremely confusing at times and such missteps often force readers to ignore the punctuation entirely in order to understand what’s happening.

Children will want to push through to see what happens to Ted-e, and the ending is a satisfying mix of sadness, as Ted-e realizes he’ll never see his original owner again, and happiness, as he begins his new life with Alfred. Some readers will find the absence of a good editor too frustrating to soldier on. For those who can overlook this issue, however, Lost & Found is worth the effort.