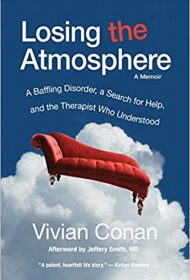 Born in Brooklyn in 1942 to a menacing, erratic father and distant mother, Conan coped by creating a secret world she called “The Atmosphere,” where she retreated whenever reality overwhelmed her. Often, she felt paralyzed, screamed, and uttered nonsense words. She was hospitalized several times for her psychological instability and suicidal ideations.

Nevertheless, Conan earned a master’s degree in library science, excelled at her work, dated occasionally, and even took flying lessons—all while believing the “Outside Vivian” was an imposter.

Conan saw a variety of therapists. Finally, at 46, she began researching psychological conditions and learned about multiple personality disorder (renamed dissociative identity disorder in 1994), which she believed described her illness. This was later confirmed by her doctor and explained her alternate personalities, including: Emily, a child who crouched behind chairs in therapy; Lisa, the angry suicidal personality; and “AlmostVivian,” the adult. As Conan healed, the Atmosphere people faded, and gradually, she began to feel “like an ordinary person” who had a few problems but was fully engaged in life.

Conan writes in a conversational, honest tone. Her descriptions are vivid and evocative, candidly revealing her unusual behaviors and deep loneliness. It’s unfortunate that she tells her story chronologically, with readers discovering her diagnosis when she does (this comes late in the book); since readers aren’t privy to her multiple personalities early on, it can be hard to understand her struggles when she’s functioning so well as an adult.

Additionally, Conan offers many unimportant details that could easily have been trimmed, such as what she was wearing at certain points or a dinner conversation with her boyfriend.

Despite such shortcomings, Losing the Atmosphere provides an intimate window into the mind of a woman struggling fiercely with conflicting emotions and fears. It will resonate with those familiar with the despair of mental illness, while offering hope as well.