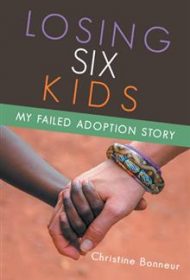 Losing Six Kids: My Failed Adoption Story, Christine Bonneur’s memoir of her three failed attempts to adopt Ugandan children, begins in 2003 when she is 27 and ends as she turns 40. She recounts the adoption process, from endless U.S. red tape to the year the naïve Midwestern Christian spent in Uganda, caught up with lying lawyers, corrupt social workers and others.

After 11 years of jumping through the hoops of the adoption process—paperwork, home reviews, etc.—Bonneur and her husband flew to Uganda in 2014 to meet siblings Kira and James. But they were uneasy with the situation. “It felt like we were babysitting someone else’s children,” she writes. Indeed, these were someone else’s children. By international law, only orphans can be adopted, but their mother, believed to be cursed by her village, had lied to give them a better life. After learning the truth, the couple convinced the mother she could care for her kids.

Their second and third attempts brought more heartbreak. With her husband returned to work in the U.S., Bonneur carried on in Uganda alone. Her solo saga reads like a mystery. She masterfully creates suspense as she tries to unwind who is lying and who isn’t. A pastor tries to shake them down; children’s ages are fabricated and social workers attempt extortion and blackmail. She tells a dramatic story with the élan of a more experienced writer. (Readers may wish, however, that she had offered more information about her husband by book’s end.)

Ultimately, the sweet-faced girl from Indiana learns that adoption is a lucrative business, and that “whenever there is poverty and vulnerability, there will be corruption.” Despite her painful, disheartening experience, she still believes in adoption but decries the idea of breaking up families in the process: “If mothers or fathers are giving up a child for adoption because they cannot afford the child, isn’t it our duty to help them keep their child?”

Her eye-opening memoir is a must-read for anyone contemplating international adoption.