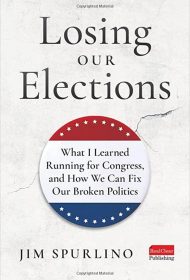 Political neophyte Jim Spurlino gives away the ending to his story in the Preface: He lost the crowded Republican primary for Ohio’s 8th Congressional District in 2016. Nonetheless, it’s almost impossible to put his story down.

Spurlino’s candid, if self-serving, account of four months as a one-time candidate exposes the election machinery that elects Republican extremists nationwide and leaves readers constantly wondering how much nice-guy Spurlino will compromise his values to win.

A concrete supply company CEO, Spurlino saw House Speaker John Boehner’s sudden resignation as an opportunity to go to Washington and vaguely “make a difference” for his district. He hired a savvy, well-connected consultant for messaging, and a 25-year-old, first-time campaign manager with links to Americans for Prosperity (AFP) to get him to forums and set meetings.

Spurlino is disappointed to learn traditional campaigning matters little. He explains how AFP, founded by the billionaire Koch brothers, and similar groups wield Super PACs to elect candidates who promote their agenda of tax cuts for the rich and deregulation of the oil and gas industry. Repeatedly, the author describes how his team “cajoled” him to express positions he didn’t hold, such as supporting “traditional marriage” and weak gun safety laws, and opposing gay couples adopting, which fire up the Republican base.

The process by which Republican operatives push primary candidates to the right to chase the same donors, and how he justifies his discomfort, is fascinating. His stories are well-paced, a good mix of fact, insight, gossip and grievance.

Spurlino isn’t afraid to reveal that he’s naïve and constantly filled with doubt about the process. He says he won’t run again for office, then describes with irrelevance his positions on gerrymandering (against) and campaign finance reform (for)—stances that essentially disqualify him to run as a Republican.

The Supreme Court’s Citizens United decision allowed staggering amounts of anonymous money into American elections. Spurlino does us all a favor by showing exactly how that money translates into power.