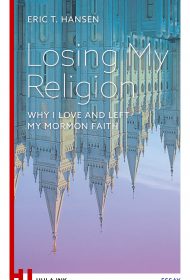 Losing My Religion: Why I Love and Left My Mormon Faith recounts author Eric T. Hansen’s soul-crushing decision to abandon his belief in God and leave the Mormon church. The memoir also chronicles Mormon history and theology, providing an enlightening account of how religion can both form an individual’s identity and destroy one’s sense of self.

At 132 pages, the book is brief, yet its content is expansive. In four chapters, Hansen successfully interweaves his story with a compelling and thorough discussion of Mormonism.

The memoir begins with Hansen’s first challenge to his faith. When he was 19, and completing his two-year mission in Germany, he proselytized a prospective convert. Rather than accepting the gospel, the man debunked Mormonism. While Hansen rebuffed the contradictions, doubt prevailed, and he started to question the existence of God and the authenticity of religion. He rebounded enough to continue his mission, but his faith was shaken.

Hansen also aspired to be a writer. However, as he illustrates, Mormonism shuns individual thought and discounts the complexity in human nature. Hansen knew that he couldn’t write with freedom of thought if he remained a Mormon.

Contradiction and paradox, intrinsic to Mormon doctrine, are the book’s central themes, and Hansen offers cogent examples, especially in the parable of Adam and Eve, which “teaches that obedience to God can only be fulfilled by disobedience.” Expanding on that notion, Hansen delivers a remarkable passage of self-reflection and clear-cut analysis about the “personal paradox” that drove him from the church: “If I wanted to obey God, I had to disobey him. If I loved God, I had to stop believing in him.”

The memoir requires editing to correct improper quotation marks (i.e., “„healing“; “„cravings“), syntax (“began to be realized”; “but it not true”), and inconsistent capitalization (“Temple”/”temple”; “God”/”god”). But these are minor issues.

Hansen’s prose vividly depicts the struggles of his life-altering personal journey. Those interested in the intersection of religion and personal choice will find his memoir both forthright and insightful.