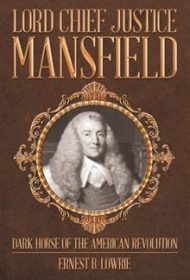 Legal scholars, historians and students of the American Revolution on both sides of the Atlantic will be intrigued by this detailed biography of the English barrister, politician and judge who crafted the Intolerable Acts of 1774 and helped propel his nation into its catastrophic war with the Colonies.

John Quincy Adams later deemed Lord Chief Justice Mansfield (born William Murray, in 1704) “more responsible for the Revolution than any other man,” and Thomas Jefferson disdained the “sly poison” in Mansfield’s draconian decisions. For his part, Yale-educated, Connecticut author Ernest B. Lowrie traces his subject’s stubborn belief that the Colonies existed “from the Grace and Favour of the Crowne alone” to his education in Scottish law, which held that colonials had a duty to pay taxes to their imperial overlords regardless of representation.

A wry and elegant writer (“After the crowd dissipated, he drank a cup of tea and went peacefully home”), Lowrie provides a vivid gallery of Mansfield’s contemporaries, including the novelist and prominent Whig Horace Walpole (who despised him), Massachusetts’ Thomas Hutchinson (who was sympathetic), Benjamin Franklin (his constant antagonist), mad King George III, and Prime Minister George Grenville, who concurred that Britain should “avail ourselves of the fruits of (our) expense” in America.

This biography features copious notes and a bibliography (but lacks an index). The narrative can be, at times, tedious and dry, and some scholars may wish Lowrie had given greater due to Mansfield’s other work: He modernized the English court system, moved his country toward the abolition of slavery and became, according to at least one expert, “the greatest judge in Anglo-American legal history.”

Still, Lowrie’s deep understanding of Mansfield’s crucial role in Great Britain’s folly (“he had gambled and lost America”) keeps the high drama of our nation’s founding always close at hand. His book belongs on any thinking person’s shelf.