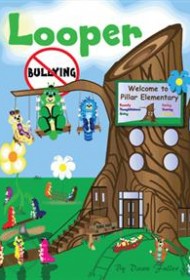 Dawn Fuller’s book, Looper, is a cautionary tale whose straightforward story and clear language will appeal to its intended audience of young children, as well as to parents and caretakers seeking to introduce conversations about bullying.

Looper, a young caterpillar, is excited when his teacher informs the class that a new student will join them. The class, however, falls silent when Woolly Bear, a very fuzzy, very blue caterpillar, enters the room. “He looks different,” one student says. “He doesn’t look like us,” says another.

During recess, a number of notorious bullies surround Woolly and start teasing him. Looper wards off the threatening students and, after consulting with a wise adult, befriends Woolly. The next day, one of the bullies steals food from Woolly and then suffers an allergic reaction after he eats it. When other students start to make fun of the bully’s swollen cheeks, Woolly steps in to defend him.

Though the illustrations are basic, parents who are looking for books about bullying will find a noble and relatable hero in Woolly Bear. Fuller tells the story in direct language that even very young readers will understand. The moral is easy to understand, too, though the story’s resolution comes perhaps a bit too easily: after being made fun of once, the lead bully never bothers Woolly – or any other student – ever again. Parents and caretakers will need to guide the youngest readers through the nuances of bullying, but Looper can serve as a good jumping-off point for such a conversation.