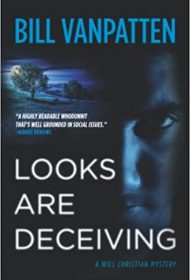 As the title suggests, Bill VanPatten’s compelling novel revolves around appearances that aren’t what they seem. First, several violent deaths in a small California town raise questions when it turns out the victims are all Latino. Are these racist hate crimes? Then, we learn the victims may all be gay. Were they murdered for their sexual identity?

Like VanPatten, the novel’s narrator, Will Christian, is an academic who left teaching to write books; he’s also gay and Latino himself. Will lives in a gated community in Mañana in California’s Central Valley near his sister. He spends his days hanging out at the gym, the local Starbucks, and the restaurant on the town golf course.

Will discovers the first body when he sees vultures feasting on the victim when he’s riding his bike. After the investigation is underway, Will can’t shake the image. Becoming obsessed with this murder, and subsequent ones, he visits victims’ family and friends under the guise of writing an article. While he initially clashes with the police lieutenant for meddling, he’s soon welcomed due to the progress he’s making on the case.

As the story unfolds, Will falls madly in love with a newcomer to town. The romance keeps readers engaged and wondering what role the love interest will play.

VanPatten’s story proceeds at a breakneck pace. His writing is crisp and no-nonsense, with a balance of dialogue and vivid descriptions of the area around Mañana. His characters are well-developed; from José, the boyfriend we root for, to the kid at Starbucks or the CVS pharmacist Will interacts with, we feel we know them. It’s also unique to read a mystery through the perspective of gay Latino culture.

Unfortunately, the author inserts passages of a prison interview with the killer without explaining what it is, or when the interview happened. These segments disrupt an otherwise gripping read.

Still, this is a terrific roller-coaster ride that readers will find immersive.