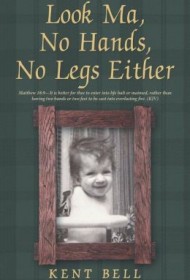 The first sight of someone with a noticeable disability can initially shade our view of that individual; yet given time, the whole person shines through. Look Ma, No Hands, No Legs Either recreates this sensation in book form. The author was born without arms or legs, which makes a striking first impression, but even in the title, his personality is evident, and soon we get to know the inner man through his writing.

Kent Bell wasn’t expected to survive when first born. His handicaps were so severe that his military father considered drinking an easier burden to bear (he got sober and reconciled with his son before his death). Bell’s father signed on to three tours in Southeast Asia during the Vietnam conflict, leaving his mother to juggle her large family alone, with siblings pitching in as needed. Interviews with family members indicate that his disability wasn’t much of a daily focus. (Asked by Bell about his first reaction to him as a baby, brother Victor replies: “I was pretty young myself and I do not recall ever thinking that you were different. You were just a baby that needed taken [sic] care of like other babies…”)

Bell flunked out of college during a stint as a partier, then got serious about school and wheelchair basketball. He and his mother made it onto The Oprah Winfrey Show, a story Bell relates with good humor and a conversational style.

The book has some typos, and a few stories are puzzling (when Bell is diagnosed with kidney failure, for example, his family is scared by dialysis and doesn’t seem to understand that it’s necessary to save his life, but their actions are never fully explained). Nonetheless, reading Bell’s story feels like hanging out with a friend, which is clearly Bell’s strength as a writer and human being.

Look Ma tells a gripping and difficult story, but never loses heart; despite its flaws, it’s a great introduction to disability awareness and a testament to a family’s love.