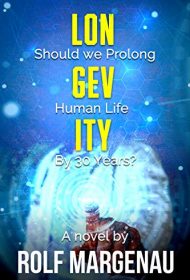 What if you could live longer? That’s the question posed by Rolf Margenau’s medical espionage thriller, Longevity: Should we Prolong Human Life By 30 years?

Scientists at the Prendergast Foundation, led by Dr. Lucy Mendoza, are closing in on a treatment that uses an enzyme extracted from a green fruit in the Amazon to extend life expectancy by decades. However, this gives rise to powerful adversaries: the frustrated billionaire investor who wants to orchestrate a hostile takeover of the project; a partnering pharmaceutical company that wants a monopoly on the blockbuster drug; and the federal government, which believes expanding Americans’ life expectancies will bankrupt Social Security. These entities aim to undermine the team’s research and eliminate Mendoza, who controls the project.

Enter Mendoza’s former love interest, molecular biologist and ex-Marine, Grant Duran. Mendoza and Grant’s relationship fell apart several years ago, after he enlisted in the Marines to fight in the Middle East. Now a disabled veteran, Grant is hired at the firm, and the former lovers begin the awkward task of working together — until Mendoza’s life is threatened and Grant becomes her protector.

Unfortunately, Mendoza and Grant’s rekindled romance is predictable and offers readers little to invest in. Other issues: Longevity occasionally becomes bogged down in expository of how the drug works, and the story’s third act veers slightly off course into the action/adventure genre as Grant travels to Cuba where he’s wounded in a gunfight after hunting one of Mendoza’s fleeing attackers.

Nonetheless, Margenau’s protagonists are likable, and readers will enjoy learning about the inner workings of the pharmaceutical industry. The story also offers food for thought, including a poignant moment when one of Mendoza’s successful participants weighs the benefits of a longer life against the loneliness and pain of seeing his friends and family eventually pass away.

A fast read, Longevity examines a topic readers are sure to find interesting. Despite its drawbacks, it delivers a largely compelling read.