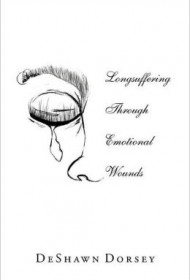 Told solely through dialogue, Long-Suffering Through Emotional Wounds by DeShawn Dorsey tells the saga of a group of interconnected individuals who face the hardships of law enforcement, child support, unemployment, drug use and complex relationships.

The novel centers on the affairs of the unmarried JT and Steph, who together have a daughter named Joy. JT, a felon but devoted father, wants to be part of his daughter’s life, while the unemployed Steph uses Joy only as leverage to demand child support. Their overlapping friendship group includes B-Dub, Posy, Rita, Cali, Mac, Tee, Les and Quay— each with his or her own entanglements. The story climaxes at a club when JT shoots B-Dub in the leg as a result of a fight between Tee and Steph.

Dorsey’s subject matter is extremely relevant in our current society. His story portrays a cycle of poverty and its role in single-parent homes and reveals a broken system that denies felons a reasonable chance at transformation. However, Dorsey fails to offer insight into these issues and instead portrays the approval of violence, promiscuity and sexism in his often unsympathetic and poorly developed characters.

The male-centric novel consistently demonizes women, who themselves attribute their shortcomings to lack of a male presence. One female character, for example, states: “I probably act this way because I didn’t have a dad or a male figure in my life.” The novel repeatedly justifies violence as being provoked by female characters, and when Mac chokes the mother of his child, JT justifies his friend’s actions, saying, “Y’all women take us there sometimes…”

If sexism and minor punctuation and grammatical errors don’t deter readers, it is likely that arbitrary chapter breaks, lack of transitions between settings, and unattributed dialogue will.

For readers looking for a short and volatile soap opera, this may fit the bill, but most will find this a challenging read.