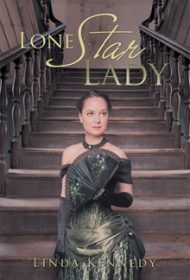 In this fast-paced historical romance, a brave heroine embarks on a quest for revenge. She also hopes to reunite with a lost love—and finds much more.

After her mother died, Morganna McKinney Caldaron and her sisters were left with her stepfather, and Morgan was named heir to her family’s fortune. In an attempt to eliminate Morgan and obtain the rights to her fortune, her stepfather hired “Comancheros” to kill her. But instead, she was sold to the Comanches.

The story begins in the Comanche camp, and immediately the action is violent and quick. Bounty hunters hired to kill Morgan murder the Comanches, but Morgan survives, and as she fights her way out, it’s clear she’s a woman to be reckoned with.

With little knowledge of the characters and their backgrounds at this point, readers may find these early scenes rather disjointed. But after a rough start, the story starts to fall into place, and the author presents a dauntless female lead, determined to win the heart of her first love, Miles, a man she met before her kidnapping and has never forgotten. She is equally determined to destroy her stepfather and rescue her sisters from his clutches. As Morgan’s character takes shape and she tackles every difficult and dangerous circumstance in her path, it’s impossible not to become invested in her mission.

Like her main character, the author takes a fearless approach to storytelling, blending action and romance, all while establishing a large cast of characters. Just when it seems the plot is slowing and readers can finally draw a breath, she throws in another unexpected twist. This is both a plus and a minus: While compelling, the story can also be a bit overwhelming. Indeed, there’s enough plot here for more than one book.

Even so, Lone Star Lady delivers an intense thrill-ride with a dangerously charming heroine.