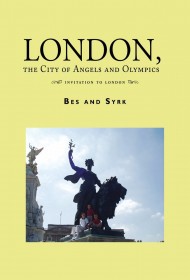 The authorship of London, the City of Angels and Olympics: Invitation to London is attributed to two young children, Bes and Syrk. The slim children’s book, illustrated with photos, seems to anticipate the boys’ journey to London to visit their grandmother and to celebrate both the city and the 2012 Olympics. The book also outlines the boys’ grandmother’s faith in angels, good deeds and positive energy. She believes that when we focus on good things in the world, the universe responds with a gift of even more positive energy. Good attracts good.

On one level, the book seems to be an introduction to the delights of London: it outlines many of the city’s joys and attractions and invites readers to anticipate seeing them for themselves. The book also asks the reader to imagine the power of angels and good deeds in the world. To that end, simple interactive games are included in which the reader is asked to find angels’ orbs in photographs. The authors suggest that this playfully proves angels are always with us, looking over our shoulders and out for our good.

London is an intimate celebration of a grandmother’s love for her grandchildren and a city she cherishes. It also wants to empower young children to take control of their behaviors and moods by focusing on the good in all things. While this message is worthy, it is unfortunate that the story is difficult for general readers to follow. The point of view shifts gears numerous times and we aren’t always sure whose story we are following. The book’s spirituality ultimately overwhelms the narrative and leaves the general reader feeling confused rather than inspired. In the end, the book falls short in both of its apparent missions: it is too jumbled to serve either as a useful travel guide or an effective spiritual tool.