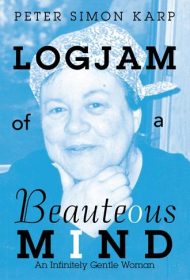 Karp describes Mona as a “cancer warrior.” Her fight was made all the more difficult by related issues: a coast-to-coast search for the best treatment, underlying mental issues of depression, panic and agoraphobia, and the roller-coaster existence of cancer patients in general.

Mona’s undoing started in 1993 after returning home to New York after a 10-day trip to London. She developed a deep cough and shortness of breath, prompting a visit to her doctor. The diagnosis was stunning: Mona, a nonsmoker, had Stage 4 lung cancer and was given only six months to live.

The bulk of Logjam – a word Mona used with doctors after a particularly unnerving psychotic episode – covers just two years, from Mona’s diagnosis to her death from an aneurysm in 1995, weeks after her 60th birthday. But Karp also writes of earlier times – their first meeting, dates, travels – in short flashbacks that render a fuller picture of their 40 years together.

Karp, president of a product research company, does an extraordinary job describing not only what his wife experienced, but what they encountered together: “Waiting itself would become our profound occupation in the world of a terminal disease like cancer,” he writes, “…[waiting] to hear your oncologist’s critical test result, changes in the disease or your latest ‘quality of life’ prognosis. No equivalent waiting exists in the wellness world.”

Karp’s intelligent, readable writing style takes what could be overly complicated issues, such as the different types of cancer trials and what they entail, and cuts out the jargon, making these issues easily understandable. The inevitable frustrations families encounter, such as simply getting an appointment with a recommended physician or being admitted into a promising trial, are also presented. Even those not involved in a cancer situation will find his insights interesting and informative.