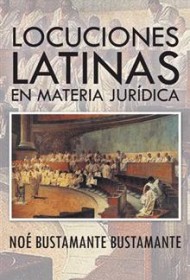 Although Latin is often considered a “dead” language, author Noé Bustamante Bustamante illustrates in his book Locuciones Latinas en material juridical how many countries still use it because their law systems are rooted in Roman law. He further declares that the use of Latin helps to keep law refined and cultured, as it was in ancient Rome.

This extensive compilation of phrases (locuciones) and terms are presented in alphabetical order and detail their origin, meaning and use. These include familiar terms such as habeas corpus, pro bono, pro forma, ad hominem, lingua franca, modus vivendi, affidavit, and in absentia. Phrases used for processes such as injunction, confession, testimony, exceptions, evidence, legal obligations, and inheritance rights are also featured, along with a section on diplomacy.

Bustamante’s detailed volume is devoted to the Latin phrases and terms used in Hispanic-American law and in parts of European law. He provides a historical background for the use of Latin in law – including the periods of the Roman Monarchy, Republic, and Empire – as well as explanations of details of Roman law, such as the Twelve Tables, which are the centerpiece of the constitution of the Roman Republic. He also provides biographical information on and contributions from ancient jurists such as Gayo, Celsus and Ulpiano.

While unquestionably informative and thorough, the length of the book (604 pages) will be a factor in how it is received. Much depends on how the information will be used by the reader. For instance, some may find the book overwhelming and unwieldy to carry around. Others may find value in having all these terms in one volume in their office. Nevertheless, this comprehensive list of terms should be helpful for law practitioners and those seeking to become familiar with legal terms of Latin roots.