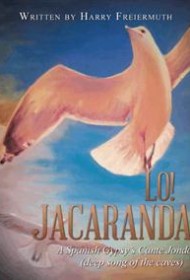 In Lo! Jacaranda, a young woman of mixed heritage is prepared for a life of luxury in Spain (circa 1760) until her gypsy blood is revealed. Her long journey to escape the Spanish Inquisition carries her all the way to California and its first missions. There are bumps along the way as the tale, replete with family secrets, moral dilemmas, and prayers (some answered, some not), is revealed.

Author Harry Freiermuth, a retired Roman Catholic priest, throws Jaco (who travels disguised as a man) into one adventure after another, from being imprisoned and sentenced to burn at the stake because of her gypsy heritage, to a daring escape, to taking refuge on a slave ship headed for the new country, only to have the ship overtaken by pirates. Throughout, he gives the journey the bawdy fun of Don Quixote: On the ship, for example, Jaco and a friend make time to critique their male shipmates’ flatulence in detail.

There’s magic (or are they miracles?) when prayers are answered, and Freiermuth illustrates the story with nicely reproduced paintings of the sea and small towns mentioned.

The story includes a few false notes that don’t fit with the time period, such as references to the San Francisco Bay Area and same-sex marriage. Such moments are unfortunate and jarring but mercifully few, and it’s easy enough to get back into the story at hand.

Despite such missteps, Lo! Jacaranda is an ambitious novella with a large cast of characters and broad geographic reach that succeeds on the strength of the characters’ love and concern for one another. From the high seas to a new world, readers will enjoy the adventure set out for them here.