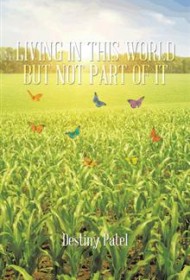 The rich tradition of oral history, especially in black communities, helps keep the past alive and offers a glimpse at a struggle for dignity that few today can fathom. This is especially true for the women — often poorly educated and abused by the men in their lives, yet strikingly resilient.

Destiny Patel opens her short autobiography at her kitchen table as she spills her life story to a niece who presumably pens the book since Patel never learned to read or write.

Living in this World but Not Part of It, is the tale of a young girl growing into womanhood whose life is punctuated by the violence that often accompanies lack of opportunity. She is forced as a child to give up school to care for her younger siblings while her parents work as sharecroppers in the post-WWII South. Falsely accused of a terrible deed, she escapes into the arms of a man who nearly kills her. She extracts herself, only to later marry another abusive man.

This has the makings of a remarkable story of a remarkable woman, whose strong faith and almost mystical outlook sustains her. While the unfolding is woefully under-developed, there are hints of true lyricism in her narrative. Patel has the instincts of a storyteller, picking her detail and descriptions with grace. Early on, there’s a lovely scene of a little girl happily giving chase to a butterfly. The sweetness serves as stark contrast to the fallen innocence to come.

Readers will be intrigued by the author’s struggle against injustice – in part because of her race but more troubling because of her gender. Her story, like those of women of her era, is important, but it’s sadly under told. Large blocks of time are missing, and the ending feels rushed and jumbled with an odd question-and-answer sequence. Perhaps collaboration with a more experienced writer would better craft and expand the narrative into the first-class memoir it deserves to be.