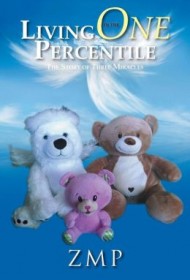 Few life changes are more shattering than the loss of a child. Making sense of the grief that follows is further complicated when that child was one of triplets, leaving two premature siblings behind. In Living in the One Percentile, a woman faces her grief with faith and determination, and offers her story for the benefit of others.

When Zane Michael Pagitt, the author’s firstborn, suddenly stops breathing, doctors realize he may not survive and let his parents hold him while he passes on, forever altering the shape of the family. The author, identified as ZMP, tells the story from her own viewpoint as “Zane’s Mommy Pagitt,” but also shares the tale of her triplets’ gestation and birth as if written by them, with Zane putting his own brief life in perspective.

Much of the narrative consists of reproduced journal entries written in conversational style (“Chase is now 19.5 in. long and has officially hit 6 lb.!!! Good job, buddy!”) Fully 40 pages are taken up with messages from congratulations cards sent upon the triplets’ birth and condolences offered after Zane’s passing.

Such a compendium of elements makes for a patchwork affair, but the author’s story is moving nonetheless. “It’s still really hard not to cry when I think about Zane,” ZMP writes. “I told the doctor when I was pregnant that my biggest fear was that I wouldn’t bring three babies home with me… It kills me that that became my reality.” It’s painful to read about such deep grief, but there’s much joy as the two surviving babies begin to grow and achieve developmental milestones.

Living in the One Percentile (the title refers to the rare occurrences that plagued the couple’s attempts to conceive and the exceptional circumstances that defied statistics as the triplets grew) is an unusual package that won’t appeal to all readers, but it may offer solace to grieving parents or inspiration to those trying to conceive.