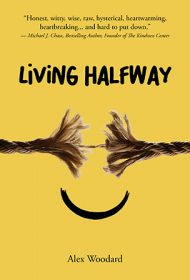 A Gen-X musician looks at his life so far with the help of four black-and-white childhood photos and encounters, real and imagined, with the girl he loved and others.

A towheaded toddler with a big guitar… a kindergartner in a Batman cape… a preteen in a blazer and tie… a nine-year-old at Disneyland. The author uses these familiar mid-century family snapshots as prompts to dig into his painful memories of a vicious school bully, the torture of not fitting in, the shattering loss of his first love, and his struggles as a professional musician.

The feelings of frustration, regret, inadequacy, and desire for revenge Alex Woodard exposes fuel present-day rants against Facebook posturing and inconsiderate people on their iPhones, just two of the contemporary annoyances he despises and for which he’s coined amusing new words such as “tech-no-life” and “mememe.” He also shares insightful imaginary conversations he has with people from his past (first love Jenny Cooper, an unnamed rock star, etc.) and even Eeyore, the graphic on a child’s T-shirt that offers the key to a new beginning. The next phase of his life is anchored by a big brown dog and little yellow puppy which give him the joy he finds so hard to get from people.

Woodard’s writing is colorful and electric, whether he’s describing the Pacific Coast nature preserve he loves or contemplating a Subway employee who’s put unrequested jalapeño peppers on his sandwich. This memoir requires a good dose of patience and compassion, however: patience to endure the author’s angry, foul-mouthed rants that don’t move his story of healing along; compassion for the regrets and disappointment bedeviling the sensitive artist hiding behind the rants. He’s not great company until the end, when he encounters the dogs and softens.

Despite all, he offers a fresh, rare perspective on life lessons. For men of his generation, this memoir will likely be welcome, devoid as it is of psychobabble and sunny horizons.