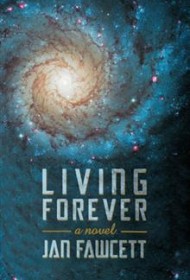 In this thoughtful science fiction novel, the author debates issues from the meaning of life to technology and its threat to humankind.

Psychiatrist and academic Ian Farrell, 68, is facing imminent death from terminal melanoma. Approached by a government agency to voluntarily have his mind transferred to an electronic biochip, he doesn’t hesitate at the chance to make a lasting contribution to science. The transfer works, but Ian doesn’t die as expected. Instead, there are now two Ians, one that is alive and functioning and appears to have been cured of cancer and one that exists in consciousness only.

As Ian-1 enjoys his reprieve, Ian-2, who communicates with others through his thoughts, struggles with being a copy of Ian-1 in mind only. He names himself Sunyata, after the story of a mystic who heard the words, “Sunyata, full solid emptiness, always aware, with silence,” which describes how he feels in his state of non-existence.

The reader is given much to ponder about mankind’s future. When Ian-2 “wakes up” after the operation, he is terrified. “No touch, no sound, no smell…I need to gasp. I can’t breathe – No, I don’t need to.” Gradually Sunyata accepts his state of being and “falls in love” with his creator, Dr. Chi MacDonald. But the government has its own agenda: teaming Sunyata with a super computer to develop new weapons of mass destruction. When Sunyata finally meets Ian-1, the two come up with a plan to counteract the eventual apocalypse.

Fawcett covers a lot of ground in a short book – perhaps too much ground – yet the story feels real, possibly because the author has melanoma, like Ian-1. The ending includes an element of surprise but becomes somewhat abrupt as Fawcett appears to be setting up for a sequel.

Nevertheless, fans of science fiction who want a look at what could be a possibility in the not-too-distant future will not be disappointed.