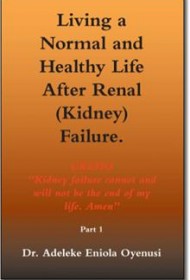 Dr. Adeleke Eniola Oyenusi, a Nigeria native living in London, was diagnosed in 2002 with end-stage kidney failure. He details his experiences in this heartfelt, moderately informative book seemingly aimed at African, Afro-Caribbean, Asian, and other ethnic-minority readers.

His story begins with him suffering unexplained symptoms, followed by a stroke, after which kidney disease is diagnosed. Initial chapters detail the profound physical and emotional adjustments demanded by disease. In 2008, he had a kidney transplant (discussed only briefly while pointing readers toward a second book; hence, the unorthodox “Part 1” of the title).

Subsequent chapters outline the various types of kidney disease, dialysis options, diet choices, medications, and caveats. The thrust toward African/Afro-Caribbean readers is mainly evident in the mention of certain foods and cooking methods, and in the author’s discussion of religion and illness.

While the author’s explanations have an appealing simplicity, the writing is choppy, fairly superficial, and sometimes confusing. A list of high-fiber foods includes breakfast cereals, spaghetti and rice, without specifying the truly high-fiber whole wheat/brown varieties. Tomatoes are included in the section on eating fresh vegetables or fruits daily, but elsewhere we’re cautioned to “decrease the amount of tomatoes used” to control potassium levels.

The author’s honest appraisal of his own grief and medical missteps is admirable. Especially powerful is his discussion of the role of spiritual belief, which at first made him refuse a much-needed transfusion, among other things. Instead of praying for a miracle cure, he exhorts readers to “practise your religion and also back it up with God-given innovations of medicinal science.”

He winds up with an appeal for global awareness of the challenging health scene in Nigeria and closes with a brief glossary and references.

On balance, this earnest book delivers enough information to offer readers the beginnings of awareness on the topic, but ultimately leaves too many questions in its wake to satisfy. Perhaps Part 2 is necessary to complete the picture.