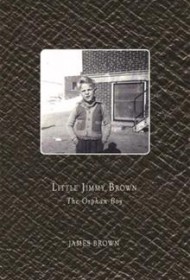 In Little Jimmy Brown: The Orphan Boy, James Brown’s memoir of growing up in a Nebraska orphanage in the 1940s and early `50s, the author begins with the story of his single mother who falls for a sailor and becomes pregnant. Before her beau learns of her condition, he ships off to war and disappears from her life. By the time her son turns 3, the mother is struck by the disease that took the lives of her own mother and aunt and moves into a state hospital. Little Jimmy goes to live at a church-run orphanage.

Throughout his memories as a toddler, which are at turns sweet, heartbreaking and even funny, Brown advocates for the orphanage system over modern-day foster care. These swings into social commentary distract from the narrative, as though he tacked together two distinct books without doing justice to either. In doing so, he often fails to prove his argument.

For example, Brown fondly refers to the other children in the orphanage as “brothers” and “sisters,” the adults as “aunts” and “uncles.” But he also tells of missing physical contact from a loving adult, except when the staff rubbed lotion on his chapped skin. Many nights, he and other boys in his dorm cried themselves to sleep. These emotional gaps in his upbringing might argue against orphanage life.

Brown dedicates the book to his wife and sons and says the orphanage gave him “the security that one needs to become a successful and happy adult.” The reader is eager to see how he turns out, and how he compares his own family with his childhood. Yet his story stops at age 12, when the orphanage closes and Jimmy returns to his aging grandfather. Readers are told they “will have to read the next book to find out what happened to little Jimmy Brown.” This is quite a letdown and ultimately leaves the reader unsatisfied.