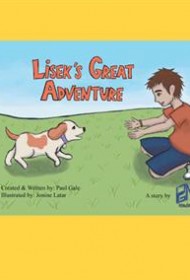 In Lisek’s Great Adventure, Paul Gale’s debut picture book, an older dog named Lisek recounts her life story. Lisek “didn’t always have a name,” having lived in an animal shelter, where the animals dreamed of “a young boy or girl to be our friend.” That dream comes true when Paul arrives with his father and takes to Lisek at first sight. They bring Lisek home, where she meets Paul’s mother, his friends and their pets. Paul and Lisek see a shooting star, and Lisek wishes for many more adventures with her new master.

Over the years, Lisek and Paul spend plenty of time together at the park, at the beach and in the snow. But as Paul grows older, he has less time for Lisek, sometimes choosing to play video games while she pines outside. Then one night, Paul shows Lisek something special: Lisek has always worn a tag reading, “Paul’s Best Friend.” It turns out that inside a bracelet Paul has worn since he got her is the inscription, “Lisek’s Best Friend.”

Gale’s story has some lovely, well-observed moments. The story about adopting a shelter pet should please young animal lovers. And when Lisek and Paul go to the beach, the dog recalls that “the ground was soft, yet hard to walk on.” The second half of the book, however, is downbeat despite the feel-good ending. Though Paul’s relative neglect of Lisek as he grows older is a good conversation-starter about the lifetime commitment involved in owning a pet, it might upset sensitive children. (Paul never seems to notice Lisek’s sadness at being ignored.) Jonine Latar’s illustrations, though a bit amateurish, are pleasant, especially her depictions of Lisek’s facial expressions.

Parents and teachers hoping to educate children about pet ownership might want to seek out a book with a more emotionally consistent message.

BlueInk Heads Up: Parents or librarians looking for picture books featuring children with disabilities should note that one of Paul’s friends uses a wheelchair.