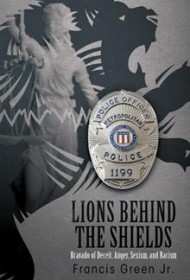 When African American rookie police officer Frank Grima enters the police academy, he gets a fast introduction to the so-called “lions behind the shields,” but it’s not a totally new experience. As a boy 11 years prior, Grima had a brief and ugly encounter with one of the “lions” — the angriest, most bigoted and violent of the officers — and it’s a memory he’s not likely to forget. But it’s also one that helps form the future cop into one determined to serve with honor and integrity.

This tale is described as fiction based on true events, but for the most part Lions Behind the Shields reads like a personal recollection of years in police work. Many of these stories chronicle the deeds of corrupt officers, discrimination and sexual abuse. They also offer a look at the people outside the law, such as Ian Patin, a man about to lose his job over a speeding ticket, who ends up losing his life.

“In life, Ian had not been a violent man. He had worked hard all of his life to earn a decent living for his family. His mental illness was not a crime; however, his behavior had lead to criminal conduct.

“Unofficially, Ian Patin died as a result of suicide by cop.”

Green delivers the tales with authority and composure. But the writing can read like a police report, at times even clinical, particularly when the subject is rape. “The intruder then penetrated her vagina with his penis … and raped her,” reads one such scene.

The dialogue can also sound stilted in places. Nonetheless, this is an intelligent and well-considered effort, and one that should be of interest to a broad audience, particularly minorities, both inside and out of the law.