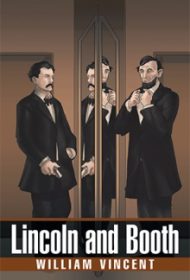 With Lincoln and Booth, William Vincent offers a free verse, closet drama or “reading play” in the tradition of Stephen Vincent Benét’s John Brown’s Body. Lincoln and Booth, like the latter, addresses the Civil War and covers much the same timeline, beginning before Lincoln’s election and extending just beyond John Wilkes Booth’s death. In this play, Vincent concentrates on Lincoln and Booth and their opposing ideologies.

In addition to his characterization of these two figures, the author provides a gestalt of the times by adding dialogue for historical personages like Mary Todd Lincoln, William Seward, Horace Greeley, John C. Breckinridge, James Ford and Frederick Douglass. A host of fictional characters, including two African American servants at the White House, round out the cast. Readers, however, may be offended by the caricatured diction of these last two: “Yeahhhh.
Lawd! I sho’like a be out walkin…Da ol’sun be GLARIN…”

While highlighting the chronology of events, the author explores recurring motifs, viz., slavery’s part in the Southern cotton economy, Lincoln’s regret that he didn’t advocate universal emancipation in his Cooper Union address, and the idea that each great man or event is patterned after an earlier great man or event. Thus, Lincoln, in a premonition of his death, compares himself to Agamemnon. “I felt as it were that scene…in Agammemnon [sic]…when that proud king had returned from his great war.” As the author depicts Booth sliding into insanity, the character sees himself as a noble Brutus about to execute Caesar.

Although the author demonstrates a comprehensive knowledge of the Civil War era and peppers his verse with some resonant phrases (e.g., describing a congressman who won’t swerve from his party as a “rock in a hard-packed soil”), his book has many problems.

Vincent’s penchant for seeing one period of history overlay another leads him to craft tedious monologues for his characters, where they compare themselves—often for pages—to their historical counterparts. The dialogue is also sometimes turgid or nonsensical: “Their deaths mean (seemingly) nothing, yet, this! means? How is it, then, that I mean…that this ‘thing’ means when NOTHING seems to overall?”

In addition, the author has a fondness for lame puns (“Then fix it, Abe Lincoln. You are most ABE’L to…”) and peppers the narrative with an inappropriate use of capital letters (“…like the maJORity here tuh-NIGHT”). Both are off-putting and distracting. The play is also overly long (580 pages), even for one meant only to be read. Many readers will drop out far before they reach its culmination.

All told, these problems create a difficult read. Lincoln and Booth requires considerable editing before most readers would find it accessible.