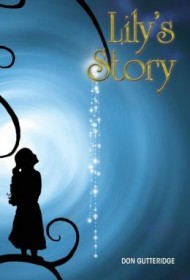 This elegant novel is the richly detailed saga of a formidable heroine called Lily Fairchild.

The story begins in 1845, when Lily is a plucky seven-year-old growing up on a bone-wearying homestead in the wilds of western Ontario. When last we see Lily, in 1922, she’s “Granny Coote,” the resident madwoman of gritty Port Edward, feared by children, scorned by adults, haunted by ghosts. In between, retired university professor and award-winning poet/novelist Don Gutteridge constructs a fascinating, if slightly overheated, life steeped in tragedy, striving and hard-won triumph.

Bright but unschooled, Lily is orphaned young, loses two children, three husbands (one to war, one to suicide), and a house (to fire). A great beauty, she is improbably seduced by England’s visiting Prince Albert, taken in by a kindly aristocrat or two and falls, in Dickensian fashion, into a smalltown slum, where she scrubs sheets for a brothel. Later, she’s introduced to Schopenhauer and Oscar Wilde by a disgraced ex-politician. Early on, Gutterridge, writes, “Lil stood where she was and wrestled with the dark angels of her imagination,” a bout which continues all her days.

Ontario natives will best appreciate fellow resident Gutteridge’s often-dense passages of local history—the burgeoning railroads’ rate wars, say, or the effects of “Brownite Reformism.” And Gutteridge can sound like a Victorian pornographer occasionally (“she seized the engorged sceptre with both hands”). But most of his prose is precise, colorful and witty. Of a huge woman, he writes: “The hummocks and drumlins and foothills of her flesh were housed in a cerise-and-violet striped awning.”

Lily’s Story fully reveals a courageous woman “maintaining the continuity of one’s being . . . the connective tissue and the nerve-beds of a lifelong existence in one place over time.” It will likely enthrall lovers of historical fiction in the melodramatic mode.