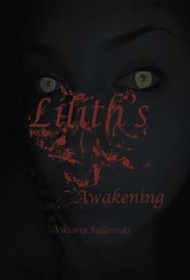 Lilith’s Awakening is a short novel that attempts to blend together elements of paranormal fantasy, mystery, horror, and Jewish mythology.

Viktoria Nelson is a medium who frequently helps local police with unsolved cases. But little does she know that a Turkish coffee reading she does for a troubled young woman will entangle her and her family in an apocalyptic plot that includes the return of a Biblical villainess (Lilith, the first wife of Adam) and a plan to open wide all the doors to Hell. Her investigation leads her to some startling revelations, namely that her husband Brandon is somehow intimately involved in the demonic plot and that a long-ago tragedy — the death of her newborn twins — is also connected.

But what appears to begin as a paranormal mystery Ã  la Kat Richardson’s Greywalker saga quickly devolves into an uninspired read that falls short on character development, plot intricacy, dialogue, realm building, and, perhaps most importantly, narrative believability. All of the characters are two-dimensional, and the stiff and awkward dialogue only succeeds in making the characters seem even more cardboard. In places, the dialogue is unintentionally comical: “…you thought you were making love to Brandon, but unfortunately, it was Lucifer.”

But it’s the unrealistic storyline that dooms this novel. There are just too many obvious coincidences and characters too often behave in incomprehensible ways. For example, Nelson’s husband just happens to drop a black robe with arcane symbols on his way out of the house. And after almost being murdered in a hospital by an assassin dressed as a nurse, the doctor casually informs Viktoria: “By the way… I’m glad you didn’t take [that tablet], or we would be trying to save your life right now.”

This novel should have been as terrifying and compelling as Ira Levin’s 1967 classic Rosemary’s Baby — the overall storyline certainly was comparable — but the aforementioned flaws ultimately make this a forgettable read.