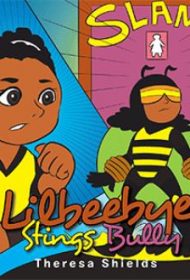 In Lilbeebye Stings Bully, an empathetic girl with the power to become a giant bee wields magical stingers that can make bullies kinder.

Lilbeebye’s superpowers are masked by her usual appearance as a young girl. But when she is ignored when trying to protect her friend Sally, who is bullied by a bunch of kids at school, Lilbeebye has to resort to using her powers. Away from prying eyes, she turns into a girl-size bee and stings the bullies, injecting their hearts with “honey love.” Deeply moved, the bullies apologize and hug everyone.

Later, Lilbeebye uses her powers to protect her sister as well. The book ends with Lilbeebye and others going to church, explaining what bullying is and pleading that people be nice to one another.

While the story has a happy ending and worthy intentions, its delivery lacks polish and the message feels misguided. The protagonist must resort to magical powers to stop bullies from behaving horribly when she’s unable to persuade them through words alone. This is likely to send the wrong message to children, who don’t have superpowers.

Also, the writing constantly shifts tenses and contains confusing sentences, as in: “She did not want anyone to know so she dismissed herself and runs to the bathroom to change into ‘Super Honey Girl!’ she shouted.”

The colorful, full-page illustrations are a bright point in the book but mostly end on page 18, followed by several pages of dense text. Additionally, the illustrations don’t always match the text. For example, in Lilbeebye’s transformation into a superhero, the text notes that her appearance changes: her “lips, eyelashes, hair and eyes were all yellow and black.” However, in the illustration, her lips and hair don’t visibly change color and her eyelashes and eyes are covered by a visor.