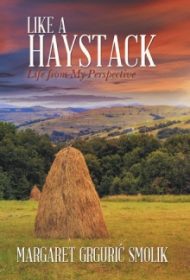 In the midst of war, people are displaced virtually every day, their lives changed forever. In Like A Haystack, author Margaret Grgurić Smolik relates the story of leaving her childhood home in Croatia during World War II, being relocated to Austria, and finally immigrating to the United States. It’s both a grand adventure and intimate family story, nicely told.

Smolik (and her older sister Theresa, who provides some details as well) describes their family as poor but hardworking, preserving foods and trading handmade brooms for enough food to feed everyone. When they’re forced to leave their village for Austria, it sounds idyllic at first: the grandeur of the Alps, fresh mountain streams and meadows. But they are crushingly poor; the adults are occasionally forced to beg for food, and the children are painfully aware at all times that they’re seen as outsiders. Moving to the U.S. means a new set of challenges, but the family is admirably persistent and makes its way yet again.

The title refers to the seasonal haying that men in the Austrian barracks they once called home would do in the fields, and Smolik came to see the haystacks as a metaphor for her own life. When a haystack is properly formed, its outside may be weathered, but the inside remains unchanged. It’s an apt comparison, considering the resilience that was cultivated in her by so much change in her early life.

Family photos and poems dedicated to her sisters, clearly indicate this is a keepsake collection, but the memoir makes compelling reading for outsiders as well. While Smolik captures a child’s-eye view of life in wartime, she brings her maturity to bear on the writing as well, balancing analysis with description from a fresh perspective in each new chapter of her life. Like A Haystack shares one woman’s perspective on her life, but the emotional journey is universally relatable.