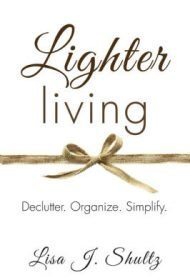 Call it simple living, minimalism, or “tidying up.” Whatever you call it, getting rid of stuff is enjoying a cultural moment. Author Lisa Shultz offers a personal take on the process of paring down with Lighter Living: Declutter. Organize. Simplify, a thoughtfully written and organized addition to a subset of self-help books that is itself becoming a bit overstuffed.

In clear, unembellished prose, Shultz describes downsizing from a large home after her divorce, as well as clearing and disposing of the possessions of each of her parents. She then uses these anecdotes to guide readers to consider what they hope to gain from decluttering, to evaluate the usefulness of items, and, finally, to dig in and actually do the work.

A lengthy bibliography resource list is included for further study, and Shultz quotes the work of others throughout. Although the quotes are relevant and properly attributed to sources, they are sometimes so numerous (three in a two-page spread, for example) as to mute the author’s own voice a bit.

Shultz covers familiar territory, such as reducing paper buildup, redistributing things when kids outgrow them, and cutting food waste. But she also makes a bold proposal or two: In one case, she shares how, instead of holding onto file cabinets full of information on her interests, she instead began writing books about them, increasing the likelihood that what she leaves behind will be useful and appreciated. In another, she notes that she has found yoga helpful to loosen the hips and other bodily areas “where I carry tension—tension I could experience in the decluttering process.”

Shultz acknowledges that Lighter Living doesn’t break new ground in its genre. Rather she offers personal stories of how hard it can be to let go of things and the reasons why it’s worth it to try—stories readers interested in the topic are sure to appreciate.