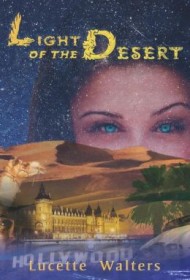 Light of the Desert may be Lucette Walters’ debut novel, but it feels like the work of an old pro. Walters masterfully interweaves a romantic adventure story with serious social themes in a page-turner that seems much shorter than its nearly 600 pages might suggest.

Through the eyes of a beautiful and naïve young woman, Noora Fendil, Walters brings us to the Middle East, where “honor killings” still happen. The Fendil family is rich and powerful, and when it appears that Noora has shamed them, her father feels he has no choice but to do the unthinkable: drown his own daughter. She survives, however, and this is the compelling story of her escape from an oppressive culture and her discovery of her own strengths.

It’s also the exciting story of a woman tragically separated from her true love, travelling from one exotic locale to another. Walters captures the astonishing opulence of the Fendil family mansion in Egypt, the earthy wisdom of a Bedouin desert village, and the high-octane world of Hollywood with equal ease, making us feel as if we’re travelling right along with Noora. Walters puts Noora in plenty of danger—there’s a ruthless stalker determined to capture her and return her to “justice” for instance—but eases the tension periodically with delightful interludes with kind strangers who become friends. This back-and-forth rhythm makes the pages fly.

Noora’s consistently forward-looking perspective, shown both through seamless dialogue and convincing internal musings, provides her stability as she copes with a rising tide of threats from all sides. Noora herself is, indeed, the “light of the desert,” and in this compelling story Walters keeps us firmly on her side, riveted to every step of her journey.