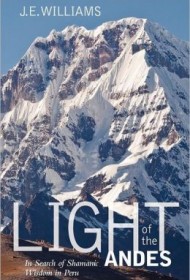 In 2007, author J.E. Williams was informed by friend and shaman, Sebastian, that the spirits felt it was time to reveal their teachings and ancient shamanic principles of the Q’ero, a traditional, indigenous people living in the Andes Mountains. Light of the Andes documents Williams’ odyssey, both physical and metaphysical, throughout the Andes Mountains, for the sole purpose of facilitating these revelations.

Williams lived with the Q’ero for years, submerged in their culture, sacraments, and day-to-day events. Light of the Andes emerges from his deep respect for Q’ero ethos, intuition and cosmological connection to life in its myriad manifestations.

He is led by Sebastian and Sebastian’s son and apprentice Nicolas through the enigmatic realms of Ayni, the Q’ero worldview of reciprocity distinct from religion or philosophy. They wander through contemporary, heavily populated cities, villages, and ruins, such as Machu Picchu. They sift through visions, dreams, and apparitions as they ascend mountains and skyscrapers. Like the Three Magi, they seek spiritual information crucial to themselves and the future of humanity.

Williams’ exquisite, vivid description of their travel experiences, both corporeal and spiritual, is understated, fresh, sometimes astonishing and often as lyrical as poetry: “….the man becomes transparent until there is only scintillating light formed as if Suryamana is refracted in countless drops of rain…”

There is an engaging, exhilarating quality to Light, which works on numerous levels, whether we are considering resonant truths, or reveling in the details of a society vastly different from our own. For the Q’ero, the “invisible world” is every bit as palpable and authentic as the material one. Sebastian and Nicolas are always poised to spot oracles that portend insight from the Apus, the tutelary spirits that they feel guide mankind. Williams strives to elucidate, and patiently elaborates on every step of his breathtaking journey. Light of the Andes is absorbing, cogent, radiant and fascinating.