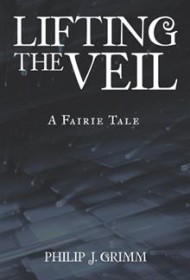 Phillip J. Grimm’s Lifting the Veil: A Fairy Tale follows the long tradition of prophetic literature: writings purportedly inspired by divine providence. Compelled by God to disclose the hidden nature of humanity, Grimm argues that modern thinkers care only about the body. What’s missing is the acceptance of the soul. Combined, flesh and spirit form the true human: “the Homo sapiens is a cello,” Grimm writes, “The human soul is the cellist. The music made by the interaction between cellist and cello is the human being.”

Lifting the Veil isn’t a fairy tale as the subtitle suggests, but a manifesto of ideas that combine Jungian psychology with Norse mythology, Gnostic concepts of reincarnation, quantum physics, and modern day consciousness studies. Throughout the book, Grimm explores such topics as heaven; the reality of our spiritual parents (a race, he writes, of angelic-like entities known as humanitas eternitas); and the metaphysical importance of dreams and sleep.

Moreover, he discusses controversial topics such as abortion and homosexuality, arguing that “early abortion is acceptable to God when preformed prior to the twelfth week of gestation” (i.e. prior to a fetus taking on a soul in the 2nd trimester of pregnancy, an idea that has circulated in various faith traditions for at least 2,000 years) and that “God’s proscription against Homo sapiens [sic] homosexual activity is not directed at the act itself” but in the fact that it makes conception, and hence the future creation of a soul, an impossibility.

Lifting the Veil is a highly opinionated work: a rollercoaster of thoughts that can leave you feeling equally intrigued and unnerved at the same time. While Grimm is a competent writer, there are certain ideas that may disturb some readers (e.g. “God regards the Homo sapiens as breeding stock.”).

This most certainly is not a work for everyone. Those interested in such prophetic works as A Course in Miracles, however, might find Lifting the Veil an interesting, if trippy excursion.