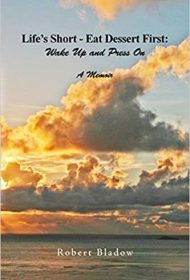 Author Robert Bladow has penned a memoir that not only reflects upon his own life, but also reaches back to reflect upon two generations in his family in Life’s Short – Eat Dessert First.

In one section, the author focuses on his grandparents’ financial struggles and relationship mishaps at the turn of the 20th century across Michigan, Montana and the Dakotas. In another, he pays respect to his beloved brother, who died suddenly from an inexplicable illness. He charts his parents’ history, including his father’s songwriting pursuits in the difficult world of Depression-era show business, and his mother’s ingenuity managing a home during the same time.

Bladow reminisces most, however, about his own post-Depression childhood and teen years as his family followed his father’s career moves throughout the Midwest. He catalogs his time as an amateur actor, through college and military days, and his professional growth in the then newly burgeoning field of information technology. Throughout, he aims to present his personal philosophy: that persistence and perseverance is the key to a meaningful, successful life.

While the memoir’s intent is admirable, the execution falls short. Bladow switches from first person to third person perspective inconsistently, which makes for a difficult read. In addition, his anecdotes sometimes ramble, and occasional items —a snippet of a screenplay he drafted based on how he believes his father would have written it, and what reads like a direct transcript of a promotional brochure for his honeymoon vacation—are distracting and feel incongruous to the rest of the narrative. On the whole, the book ends up feeling more like reminiscences recounted while sifting through photographs rather than a unified narrative.

Those who enjoy peeking into other people’s lives might enjoy the story, but readers should be forewarned that despite its worthy intended message, the book can be difficult to navigate.