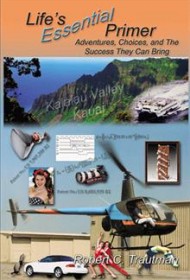 Robert Trautman has packed a lot of living into his time on earth. An electronic engineer (with two patents to his credit), Trautman also flies helicopters, has developed a following for his signature line of photographs (that celebrate the nude female form in natural settings), and can credibly brag that, back in the day, he cut a mean figure in both competitive gymnastics and roller-skating.

These serial successes prompted Trautman to write Life’s Essential Primer. In this uneasy blending of memoir and self-help formats, Trautman attributes his accomplishments to making the right choices often enough to create a cycle of opportunities he leveraged to his advantage. He describes the many pitfalls he avoided, such as teen pregnancy and drug addiction, problems that can derail a young person’s dreams. Trautman promises that readers who follow his advice will be put on the road to success.

Life’s Essential Primer is divided into two sections and largely reads like two different books. In the first section, Trautman lays out his “Principles, Practices and Philosophy.” Here, he outlines his ‘how-to-live’ beliefs, which range from the mundane to the insightful. The remainder of the book chronicles the author’s life experiences from elementary school to post-college. There’s a sweetness to many of these passages, particularly Trautman’s stories of the childhood antics he shared with his identical twin brother, Bill. Unfortunately, their power gets lost in a disorganized presentation, in which technical information about electronic home calculators, for example, shares the same chapter with recollections of playing “flag tag” in his backyard.

If Trautman had threaded the nuanced concepts at the book’s beginning throughout, his real-life experiences would have seemed more grounded in his beliefs. As it stands, readers are likely to feel buried in this jumble of seemingly unrelated information.

Overall, while there are nuggets of useful advice to be found, Life’s Essential Primer presents a challenging read, one that many may abandon in frustration before they reach the end.