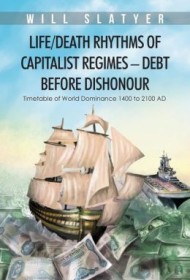 With this second volume of historical analysis, Will Slatyer, an Australian broker and commodities consultant, has attempted nothing less than a sweeping two-volume history of the world. Like his first (also reviewed by BlueInk), this volume centers on the Cyclic Theory of history, best known by the often-repeated claim that “history repeats itself.”

This volume (confusingly titled exactly as his first without a “Volume II” subtitle) concentrates on the years from the Renaissance to the present. Readers would do well to consult the opening three chapters of Slatyer’s first volume, which contains an excellent summary of this theory of history, as here Slatyer assumes his audience is largely conversant in this theory. Indeed, without this theoretical background, the book may read as a series of mini-histories, offered in a largely familiar textbook-style presentation of facts.

Yet while Slatyer’s prose can often be leaden, his Volume II takes the cyclic theme, particularly its corollary thesis of climate change as a cause of historical patterns, to a place where the first volume only began. In this, Slatyer’s charts are absolutely fascinating, taking traditional historical timelines and interspersing them with climate events which, he argues, seminally affected the history of that culture or nation. His chapter on modern American history stands out in this regard, as he links events such as Sunspot Solar Cycles and Cold-Dry Climatic Peaks to specific occurrences in the republic’s history. The result is a completely different chronology of political, social, and economic history than is available in other American history texts.

In his conclusions, Slatyer goes too far by forecasting the fate of world cultures in the years 2020-2035 based on his predictions of climate change. Most scholars see such prophecies as merely intellectual parlor games. But Slatyer’s second volume of his magnum opus is an absorbing exercise in analyzing history not through the actions of great men, or great philosophies, but through great environmental transformation. For this, these books stand alone.