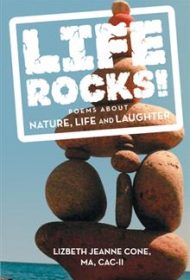 Most of the poems in LizBeth Jeanne Cone’s Life Rocks! appear to describe relationships and experiences from her life. Like many poets, she tries to capture the essence of these things by depicting a moment in time or detailing components which, by their cumulative weight, are meant to represent the whole.

Thus, in two of her poems about children (presumably the poet’s grandchildren), she picks the moments when they are learning to Rollerblade and to use a pogo stick to evoke their camaraderie and spirit. In another poem (“Cruise Appeal”), she lists standout moments and aspects concerning her traveling companion and the ship’s routine to give a feeling for the entire adventure.

In addition to these largely experiential poems, Cone includes a few verses meant to deliver a message. In “Plasia,” for instance, she takes a stand for environmental awareness, decrying the refuse that creates “a plastic vortex the/ size of Texas” in our oceans.  Cone also includes poems by other writers in her book: one that looks to be by a child, Nathan Braun, and three by Arizona author Michael Feldt.

Although Cone has chosen free verse as her main medium, she’s not above adding the occasional rhyme, and a nice sense of energy underlies her work. Cone also includes some memorable images, such as flamingos doing the cha-cha (“Pink Parade”) and hate “spreading like kudzu” (“My Name Is Mohammad”).

Too often, however, Cone’s poems suffer from her overuse of abstracts.  Lines such as, “All of nature gives me the intense feeling as our souls/ meet up against time,” from her poem, “You Are Still With Me,” are typical. They fail to convey precisely what the poet means and lose readers in generalities. More vivid imagery and precise detail would greatly improve this work.

For this reason, Life Rocks! is likely to have limited appeal among readers of contemporary poetry, although it will certainly be of interest to the author’s friends and family.