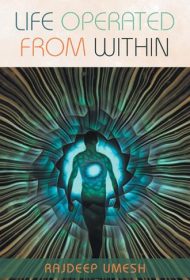 What is the cause of the events in our lives? Are we responsible for attracting these events? Or is it a matter of fate, divine intervention, or blind chance? These are the questions author Rajdeep Umesh confronts in his slim book, Life Operated from Within.

For Umesh, our mind determines our inner world as well as the world that seems to appear “outside” of us. Even severe illnesses, he holds, are, at root, brought on by our own consciousness. The key to self-realization and the cessation of our usual conflicts and problems, is to assume control of the mind through meditation, visualization, and by focusing in the present moment. Through these and other means, humans may undergo an evolution leading to freedom, creativity, and the realization that the self is eternal.

These are ideas many authors have addressed. Unfortunately, Umesh’s message is obscured by a convoluted writing style. He frequently uses jargon, such as “etheric consciousness,” without clearly defining the terms. Run-on sentences are wearying and confusing (“In a secluded environment, when the individual entity is subject to action on its own, the environment created by the individual remains in tandem with the individual actions of the other entities in the shared environment because of the supreme action of the undivided consciousness…”).

Oddly, a summary of the book at its end, detailing steps readers can take to implement his philosophy, is written in simple, declarative sentences: “Always look within. Be in self-awareness mode”; “Never, ever fear. To fear is to invite trouble before it exists.” This section makes it clear that the author is capable of writing lucidly.

If his chapters on theory were as clear and concise as his statements about its practice, Umesh’s book could hold its own among other works of popular spirituality, such as Eckhart Tolle’s The Power of Now. As is, the book articulates a vision, but it is presented in a fashion that will elude many readers.