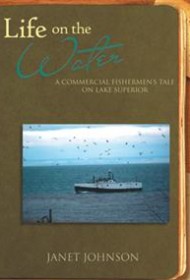 Janet Johnson educates and entertains with her nonfiction children’s book, Life on the Water: A Commercial Fishermen’s Tale on Lake Superior.

Johnson, an elementary school teacher for 37 years, lives in Wisconsin, near the shore of Lake Superior. She centers her book around 11-year-old Jeff and his family, who have been commercial fishermen for four generations.

Life on the Water reveals a world unknown to most children. It describes waking up at 3:30 a.m., using nets and battling ice, storms, and other hazards in order to make the catch that a fisherman’s livelihood depends on. Johnson’s story doesn’t stop once the fish are caught, as she details all the steps of cleaning, smoking, and selling the fish, as well as the hard, off-season work of mending nets.

Johnson’s book design is commendable, with the text embedded in what’s made to look like an old log book and backgrounds embellished with the steering wheels of boats, all bordered by an artful depiction of waves at the bottom of each page. Life on the Water contains plenty of photographs, beneficial for young readers who might otherwise have difficulty visualizing some of the descriptions. There are photos of boats on the lake and fishermen at work, as well as the various processes of preparing the fish for sale.

The words described in the book’s glossary, such as “chubs,” “brine,” and “laker,” are not highlighted when they appear in the regular text; doing so might have alerted readers to the presence of the fuller descriptions at the back of the book, which are often necessary for comprehension. There are also scattered copyediting mistakes, such as the glaring grammatical error in the book’s subtitle. But these minor shortcomings don’t spoil Johnson’s vivid account of how Great Lakes fishermen earn their living.