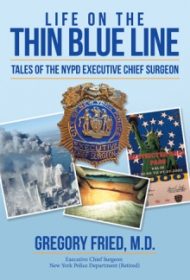 In his memoir, Dr. Gregory Fried recounts his life and career, from his birth in Brooklyn to his path to becoming an innovative and highly regarded surgeon. Much of the book focuses on his work with the New York Police Department.

In 1980, Fried became an NYPD police surgeon – a largely administrative position, despite the title. Police surgeons are called to facilitate issues when an officer is shot, examine officers applying for sick leave, along with a host of other duties. Fried rose to executive chief surgeon in 1996.

Over the course of his career, he witnessed history: medical advances, the arrival of AIDS, New York’s violent ‘80s and ‘90s and the city’s political turmoil. His surgical career and police work ended after 9/11, when he was seriously hurt after rushing to the World Trade Center; he began to treat an injured firefighter lying on a curb just as the South Tower collapsed, then was buried to his shoulders in debris.

The author generally avoids burdening readers with mundane city politics and medical mumbo-jumbo. Instead, he peppers his narrative with compelling stories. They can be humorous or gruesome—or sometimes gruesomely humorous (the prostitute he encountered during his residency who underwent a colostomy after being stabbed. She “began plying her trade on the ward, using the new orifice we had created,” he writes.) He is also often insightful, noting that shooting victims, in his experience, struggle to readjust to life, “no matter how minor the injury.”

The book is cleanly written, although one mechanical issue appears repeatedly: the omission of a second comma when using a non-essential clause. For example: “Detective Lillian Braxton, a bright, assertive officer [sic] was president of …”

This is a small blip, however, in a largely engaging book—one that should appeal to anyone interested in police work or who lived in New York at the end of the 20th century.