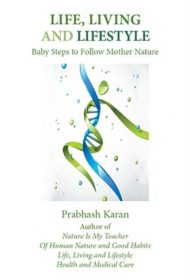 This lengthy offering is part of a five-book series written by engineer Prabhash Karan to encourage people to improve their lives.

This volume discusses an expansive range of topics. Part 1 covers losing weight, exercise (including yoga and walking), quitting smoking, sleep, and aging. Part 2 covers etiquette, science and technology, organizing work and life, enjoying your job and home, and having healthy finances. The latter subjects are much more thinly developed than those in Part 1.

Karan’s approach combines cheerful platitudes and sensible advice (such as “An early-morning walk is a permit for a happy day”) with granular detail, including charts and illustrations. The structure often feels random, following the author’s wide-ranging interests rather than a systematic organization.

Karan has a broad, informed, and curious mind, and as a result bizarre (but interesting) information often surfaces: for instance, why you should drink water from a copper vessel, in the section on losing weight, or diatribes on the health care industry, in the aging gracefully section. Sources are attributed infrequently, and sometimes the support given for various ideas conflicts (the rates of obesity given seem to fluctuate between 30-60% without explanation, for example).

The invocation of Mother Nature from the title is a mere gesture appearing mostly at the ends of chapters, for instance when Karan calls one’s home a “nest in Mother Nature.”

The author’s warm-hearted tone and good intentions are among the most appealing qualities of the book. One might wish, though, that Karan had shared his personally gained wisdom for “leading a simple natural life” rather than collating data and lifestyle advice readily available, and perhaps more easily accessible, elsewhere.