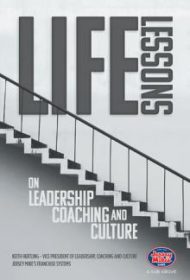 Keith Herling’s Life Lessons on Leadership, Coaching, and Culture is a guide for business owners on creating and maintaining a successful culture.  Less than 100 pages, it offers Hertling’s personal experiences with impactful coaches, first as a middle school football player and then through his work as the vice president of leadership, coaching, and culture at Jersey Mike’s Franchise Systems.

Hertling uses anecdotes to communicate his points, so much so that the text frequently feels more like an autobiographical narrative than a traditional leadership book. For example, in the chapter focusing on his college years, he doesn’t discuss influence as a concept but instead offers an anecdote about a monk at his school, Saint Benedict’s College.  “I can recall an occasion when I got in a little trouble off-campus…Father Dennis asked me if I realized how many people were looking up to me and how my success on and off the [football] field could influence others…Light bulb! His question led me to some serious reflection.”

Hertling then immediately rolls into a new story about the power of humility when he decided to take a knee and pray after every touchdown. Without some reflective context, or concept analysis, these stories lose their impact for others.

Also distracting is Hertling’s passion for his Jersey Mike’s Sub franchise.  At times, it feels almost like he’s trying to sell his readers on the business. One chapter is entitled “Be a Sub Above,” the company’s motto, and primarily consists of a reproduction of a corporate handout entitled “7 Principles of Success.” Text from an earlier chapter on culture sounds like it came straight from a corporate pamphlet: “At Jersey Mike’s we like sports metaphors – especially those pertaining to football – because of one basic thing: teamwork.”

Life Lessons seems to be a well-meaning reflection of the events that have shaped Hertling’s mindset and personal manifesto. Those looking for solid business advice, however, may wish for more.