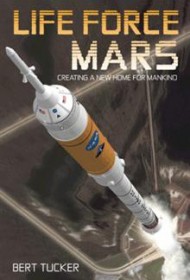 In this present-day story, a fact-based though fictional account, NASA sends two men and two women on an extended visit to Mars so they can work with native resources. (No similar mission to Mars has occurred to date, but the technology cited by the author makes the concept within the realm of eventual possibility.) Utilizing robots, plants, and animals, the team establishes a homestead and constructs a nuclear power plant that makes the environment more hospitable.

Soon they divide into romantic couples and produce the first Martian babies. Readers may want to know that when this Mars team undergoes expansion for the purpose of colonization, they seek ethnic diversity, with the exception of “Moslems, Jews, and others with ties to the explosive Middle East or to terror-related conduct.”

The back cover categorizes the book as “Science/Technology,” rather than science fiction, and that’s certainly where emphasis is placed. Bert Tucker holds a master’s degree in physics and mathematics from Louisiana State University and has worked in various piloting and technical jobs. It might take similarly degreed professionals to spot any inaccuracies in this jargon-laden text.

Each chapter’s uneven balance of too much dialogue or too much narrative makes for an uncomfortable read. The science overwhelms the storytelling with details lavished on technology, rather than character development. (For example, when Rob and Mary —two of the highly trained scientist-engineers— become romantically involved, the author employs a disappointing economy of words: “Intimacy would not be denied.”)

This dry theoretical account of a Mars mission might appeal to more readers as a nonfiction narrative without the fictional pretext. As it is, however, (non-Muslim and non-Jewish) readers seeking a purely intellectual story with no chance of emotional engagement might enjoy the “what if” scenario.

BlueInk Heads Up: Despite an unsatisfactory attempt to novelize his researched facts and figures about Mars, the author displays vast knowledge of aerospace, astrophysics, and related technologies.