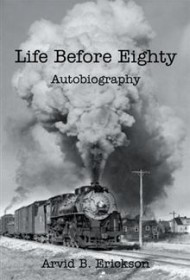 Arvid B. Erickson’s autobiography, Life Before Eighty, is not your average Everyman’s journal. Though much of this book will appeal to Erickson’s relatives and family friends, it is a historian’s jewel. American history fans will love this detailed account of the life of a railroad telegrapher in the early 1900s.

Born the same year as the infamous Adolf Hitler, Erickson was a simple, hard-working American man, matter-of-fact about life yet deeply moved and intrigued by the laws of nature. His writings peel away the stoic shell common to men of his period, revealing a poetic soul stirred by the beauty of life — its blissful and tragic moments alike.

Erickson’s writings are about nothing in particular and everything human all at once. He meticulously details his work as a telegrapher, from struggling to learn to copy Morse code quickly as a new “ham” to packing train cars with used tires for the war effort to hand-delivering telegrams to the parents of men killed in World War II. His thoughts constantly return to religious philosophies. Though he attended Baptist churches nearly all his life, Erickson never felt the need for a savior as long as he had more “credits” on his balance sheet of life than “debits.” Drawing from science, nature and various religions, Erickson formed his own belief system that carried him through the ups and downs of life.

If you are looking for nonstop action and excitement, you might be better served elsewhere. Life Before Eighty unfolds slowly, yet it is an exceptional source of historical data about the logging, railroad and telegraph industries of the Great Lakes region from the late 1800s through the mid-1900s. This book is a rare glimpse into history and the heart of a turn-of-the-century, all-American man.