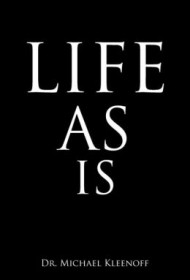 In the 16th through 18th centuries, writers like Montaigne, Pascal and Goethe trusted their judgment to assess a broad range of topics, everything from how to withstand sieges and the way to raise children, to physics, anatomy, a defense of Christianity, and the makeup of color. When they reached conclusions on their chosen topics, they published them, confident their results would be beneficial to others.

Eschewing our modern proclivity for specialization, Dr. Michael Kleenoff follows in the footsteps of these writers. In his philosophical meditation, Life As Is, Kleenoff presents his thoughts on a variety of topics, including the origin of the universe, the existence of God, the validity of the major religions, child rearing and the proofs for natural selection.

In some instances, Kleenoff, like Montaigne, shows a practical skepticism, concluding that there are some questions for which there are no answers. “We cannot say with any level of certainty that God…does not exist,” he writes. We also, he declares, cannot say that God does exist. Kleenoff, however, favors an intelligently directed universe, though he rejects the portrayals of God found in traditional religions.

Much of Kleenoff’s book is well researched, particularly in the areas of history, biology and genetics. He is weaker in sociological fields, and some of his concepts are outdated. For instance, he stresses the disparity in which boys and girls are raised, with boys being encouraged and girls being “left alone.” Most would argue that this approach is no longer true, at least in the Western world. Some of his arguments also cover well-trodden ground, as when he asserts that God unfairly preferred Abel over Cain.

Because the author presents Life As Is primarily as one man’s take on things, it isn’t for everyone. It’s appeal will be limited to those who are willing to consider an assortment of ideas from an unfamiliar source, rather than a recognized expert.