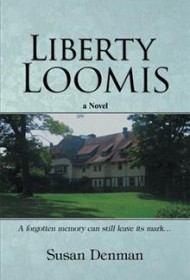 Liberty Loomis is an engaging coming-of age novel set in the farming community of Livingston Manor in the Catskill Mountains of New York.

It‘s June 1970, and 21-year-old Mayzie Jenkins is home for summer break from Cornell University. She’s starting her first day as a nurse’s aide at Liberty Loomis Hospital, and she’s nervous and moody. Her autistic older brother, Harry, believes that more than the job has Mayzie agitated; it’s the time of year. Something traumatic happened to Mayzie several summers ago – one of the “special secrets” they have shared since childhood – and although Mayzie never discusses it, Harry knows that summers trouble her.

Mayzie, who is naïve and quick to judge, avoids unpleasant thoughts that require an emotional response. Her fallback position is to push things out of her mind and face them in “some distant tomorrow.” Yet, as the summer progresses and Mayzie encounters a diverse group of people with varying backgrounds and hardships, her worldview widens. She’s forced to confront certain truths and curb her dismissiveness.

Long-held secrets, unspoken sorrow and heart-rending remembrances loom large in Susan Denman’s narrative: the tragic story of the physically abusive marriage between Annie and Sam Olson; the cruelty perpetrated on the McFadden children by their alcoholic father; the bigotry directed at Abe Zimmerman and his family, Orthodox Jews who summer in the Catskills; the fateful decision that caused Bobby Cutler’s spinal cord injury.

Regrettably, Liberty Loomis lacks strong emotional pull; the characters’ misfortunes feel superficial and positioned to advance Mayzie’s story. But this flaw isn’t enough to completely derail Denman’s debut novel. The author’s prose is lively, and Mayzie’s transformation in the end feels authentic. Utlimately, Denman manages to successfully interweave the conflicts of American society during the 1970s, when far-reaching, divisive issues such as the Vietnam War, abortion and racism challenge small-town insularity and narrow-mindedness.